Originally played by the Algonquin tribes in the St. Lawrence River Valley five centuries ago, lacrosse did not evolve as a variation of another sport from Europe or elsewhere. Today lacrosse thrives on five continents, enjoyed by an almost equal number of players of each gender. 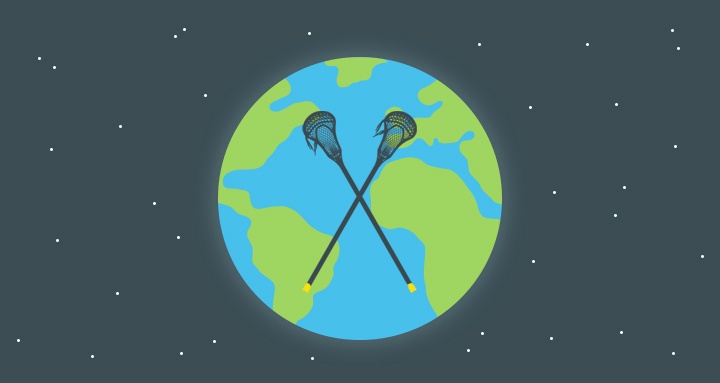 Lacrosse gained its first global recognition when it became an Olympic event for the 1904 and 1908 Olympic Games. This was the first real opportunity to display lacrosse around the world. Not surprisingly, Canada won both gold medals. Since only two other countries, USA and Great Britain, had entered the competitions, the sport was dropped from Olympic competition after 2008.

LACROSSE AROUND THE WORLD

Since World War II, lacrosse has grown substantially due to the establishment of many open tournaments, invitationals, and lacrosse leagues throughout North America, Europe, South America, Asia and more recently Africa. Improvements in equipment and refinement of the rules has made the sport more popular with players of both genders and more enjoyable for spectators.

The International Federation of Women’s Lacrosse Associations (IFWLA) was founded in 1971. The International Lacrosse Federation (ILF) for men was established three years later. The IFWLA World Cup was played in England in 1982 with the final game between USA and Australia, an endorsement of lacrosse around the world.

In 2008, the Federation of International Lacrosse (FIL) was formed as a merger between the ILF and IFWLA. Now lacrosse is truly played around the world. The league consists of 9 divisions of teams from 38 countries. Besides USA and Canada, which also presents an Iroquois Nation Team, countries as diverse as Israel and Uganda, Australia and Japan, Finland and Colombia, China and Bermuda, Korea and Austria, Argentina and Thailand compete for the FIL Championship.

Canada defeated the United States in the 2014 FIL Championship Finals. The Iroquois Nation Team and Australia were the third and fourth finishers.

AND EVEN IN OUTER SPACE?

And, to the surprise of many, in 2002, two Russian cosmonauts broke out their lacrosse sticks to test their abilities aboard the International Space Station. The exercise was part entertainment and part scientific, an experiment to gauge human’s abilities at play in a zero gravity environment.

With that experiment, lacrosse had officially evolved from local to national to global and to intergalactic. Truly lacrosse is played around the world.